A rare look inside the government-sanctioned overdose prevention site in Toronto’s Moss Park neighbourhood to meet people who work there and those who use it.

Site aims to save lives, but also gives users a sense of community and purpose 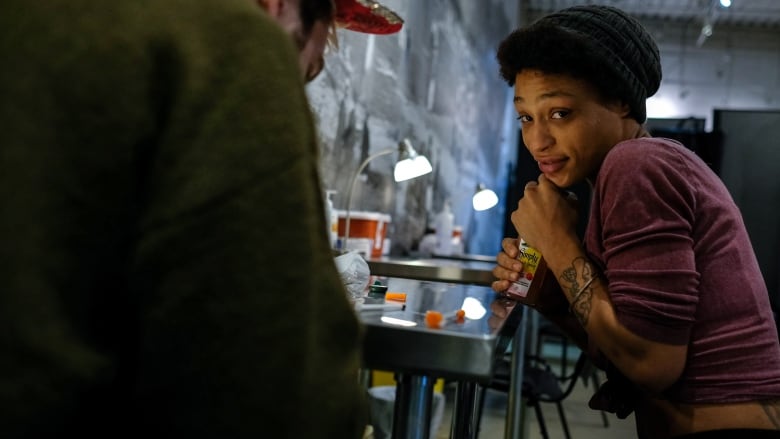 ‘We need more places like this,’ says Akosua Gyan-Mante, one of the people who uses the Moss Park Overdose Prevention Site in Toronto. ‘I don’t want to die alone in an alley.’ (Evan Mitsui/CBC)

“I’ve lost 11 friends this year … most people don’t lose that many in a lifetime.”

Dave Gordon reflects on the toll drugs have taken on the people in his life as he sits at the Moss Park Overdose Prevention Site sketching in his notebook. He’s been on and off opioids himself for decades.

“I don’t want to lose any more friends.”

More than 9,000 people have died from accidental overdoses in Canada since January 2016 — 2,000 of them in the first half of 2018 alone, according to numbers released by the Public Health Agency of Canada.

While Canada struggles with a relentless and deadly opioid crisis, places like the Moss Park site in Toronto offer help. They allow people to bring their drugs inside and safely use them under the supervision of trained staff.

CBC News was granted rare access to spend some time at the government-sanctioned Overdose Prevention Site and meet people who work there, as well as those who use it.

Gordon knows what’s driving the grim statistics around opioids only too well. He has overdosed, and described it as, “the most horrible feeling in the world. Feeling like my life was slipping away. I had no control.” 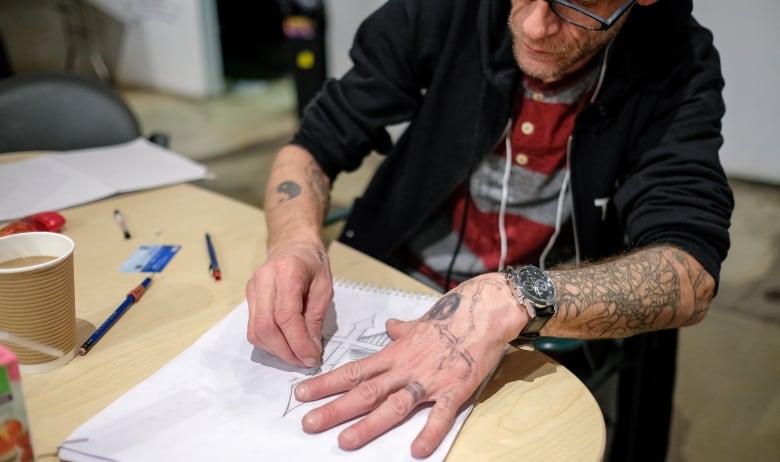 He now spends his time at the Moss Park site — partly to use safely, but also because it’s a place to be with friends and it has allowed him to re-discover his love of drawing.

Gordon is also giving back, handing out harm-reduction safety kits in the neighbourhood to help others in the community.

I’m trying to pay society back for my mistakes.– Dave Gordon

“I’m trying to pay society back for my mistakes.”

The Public Health Agency of Canada says 72 per cent of accidental overdose deaths this year involved fentanyl. And a lot of them happen when people use drugs alone.

“So when people come here they feel safe. They feel supported,” says Sarah Greig, an overdose response worker at Moss Park. “They don’t feel shamed and blamed and stigmatized, as they have been by their family, by some health care providers and by some social service providers.”

Greig says the people who come to Moss Park are more like friends, and they are building a community.

The overdose prevention site began as an unsanctioned, volunteer-run outdoor tent in Toronto’s Moss Park. It had over 9,000 visits and reversed more than 200 overdoses between August 2017 and June 2018. 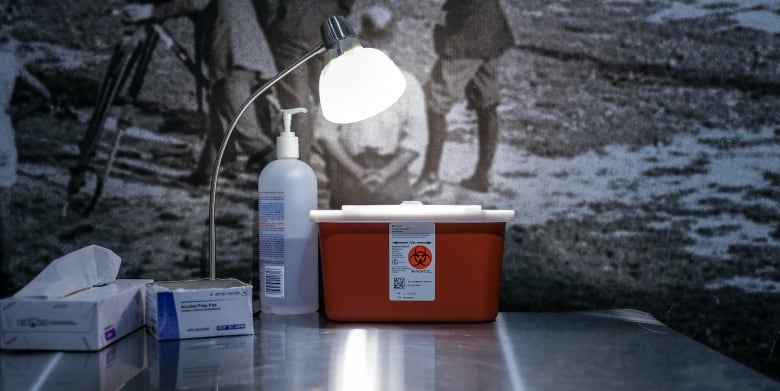 Medical supplies at Moss Park. The site has been seeing more than 100 visitors a day and reversed more than 50 overdoses since it received provincial funding in July.

After becoming a satellite of the South Riverdale Community Health Centre, the site received provincial funding and an exemption through the provincial OPS program, allowing it to move indoors in July this year.

Since then, it has had thousands more visits — over a hundred a day — and reversed more than 50 overdoses.

The future of these sites remains uncertain, however, as local and provincial governments grapple with their pros and cons and who will fund them.

Moss Park’s government funding is set to expire on Dec. 24. The organizers have re-applied, but the province is imposing stricter regulations on where overdose sites can operate, which could jeopardize the Moss Park operation.

The fact that the site might be shut down worries Akosua Gyan-Mante.

“We need more places like this,” says the 26-year-old, a regular at Moss Park. “I don’t want to die alone in an alley.” 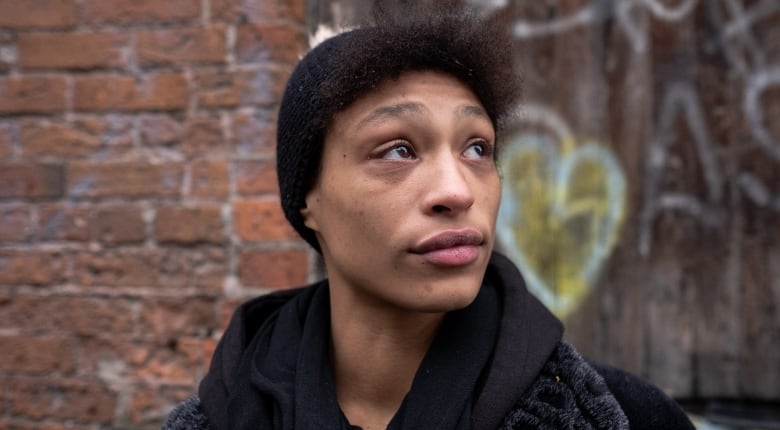 Gyan-Mante never thought she would be a drug user — growing up in B.C. in a home with a loving father, she had dreams of being a doctor. She moved to Toronto six years ago, started college and had a son.

Then things fell apart. She began injecting heroin and fentanyl this summer after her boyfriend introduced her to it.

“I’m lonely and depressed, and it makes me feel better,” Gyan-Mante says, explaining that drugs help numb the emotional pain.

She overdosed at the site this past October. Greig was there to reverse it.

We need to nurture people and we need to point out people’s strengths instead of just identifying their weaknesses.– Sarah Greig

“We need to nurture people and we need to point out people’s strengths instead of just identifying their weaknesses,” Greig says, adding that people use drugs for a wide range of things.

“This is my support system right here … [the hope that this] shitty existence will get better,” says Gyan-Mante as she hugs Greig, wiping a tear from her eye.

“It [the site] is giving me a fighting chance. It gave me life. It’s giving me another day, another week, another month of being OK.” 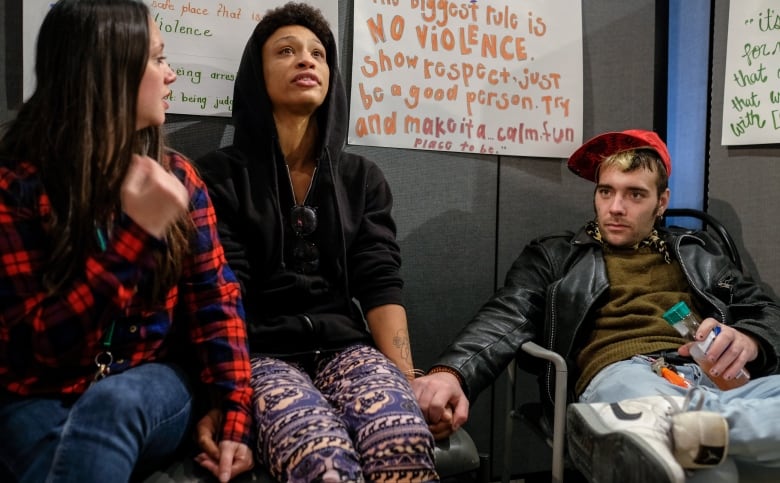 Far from just a place to use drugs, the site also offers a hot meal provided by donations, a warm place to hang out during winter, and information on support services if people want them.

The site operates from noon to 6 p.m. and is closed on Mondays.

“I hate Mondays,” Kevin Drake says as Greig watches him use heroin. “I’ve been to different sites. And this is the best.”

Drake says he has overdosed 15 times in his life. But when he is at Moss Park, he does not feel shame.

Instead, it’s replaced by pride. He is known as a guy who is always cleaning up, mopping floors and organizing the space, making sure it looks its best. 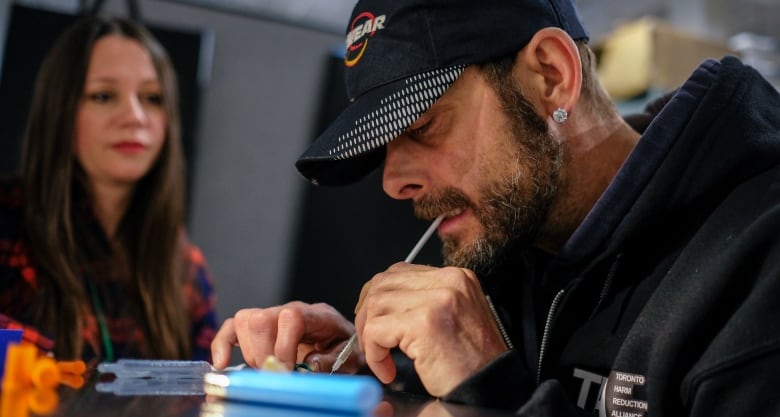 Sarah Greig watches Kevin Drake as he prepares a dose of heroin, to make sure he doesn’t overdose – and so she can take immediate action if he does. (Evan Mitsui/CBC)

“I do worry, but I use Fentanyl … that’s why I come here. That’s why I choose not to do it by myself. Because here — you’re guaranteed to leave here alive.”

The site offers safety, and it also harbours stories of hope.

Drake got a job shortly after CBC’s visit. Gordon is being asked to speak at universities about his experiences, to help find solutions to community drug issues. Gyan-Mante is hoping to reunite with her son permanently.

And that hope is exactly the point of these sites, Greig says.

“When I reflect and I think about what I’ve been doing for the past decade, a lot of it is actually nurturing people and pointing out their worth. Convincing people that they are worthy of love and affection, and that they can do anything that they want to do.”

Please see this story released by CBC News on how the Moss Park OPS aims to save lives and give drug users a sense of community and purpose: